Tripoli is located at the centre of Peloponnese and is a city known for its important part in the modern history of Greece. Theodoros Kolokotronis, the famous general of the Greek Revolution, is a historical figure of the city since he was in charge of the operations which led to the liberation of the city in 23rd of September in 1821. Tripoli is the largest city and the capital of Arcadia county. While you are in here, don’t miss the wonderful opportunity to visit the traditional villages of the mountainous Arcadia, like Dimitsana, Stemnitsa, Vitina etc, which are great throughout the year and offer plenty of experiences to their travelers. Due to its central location, Tripoli is also a great place for day trips in the nearby locations, like Astros, Sparta, Kalamata, Nafplio and many more! Very close to Tripoli you will find one of the three ski centers of Peloponnese, the ski centre of Mainalos.

Tripoli is a relatively new city and the first mention of its name was in 1467. During the end of the 17th century the city was populated with over 20.000 residents and was under the Ottoman occupancy. Around 1770 the Ottomans punished the Christians of the city by killing around 3.000 people and destroying their properties. Gradually Tripoli became the most powerful military base of the Ottomans in Southern Greece.

In April of 1821 Greeks attacked the Ottomans and the siege of the city started. The leading figure of the Greeks was Theodoros Kolokotronis. According to his memoir, thousands of Ottomans died during the battles while only 100 Greeks died from the Greek revolutionaries. The siege ended on 23rd of September of the same year after 3 days of bloodshed. These events are known as the “Fall of Tripolitsa”.

Theodoros Kolokotronis had ordered to burn the city before it was handed to Ibrahim Pasha in 1825. He used the city as a starting point for his invasions. After 3 years the Greeks besieged the city and in 1828 Ibrahim finally abandoned the city. However before he left, he set on fire the whole city probably to make the city useless to his enemies and as an action of revenge for the destruction of his fleet in the Battle of Navarino.

The reconstruction of the city started after the last destruction of 1828 and the population was gradually increased. During the German occupancy of Greece, the German Command was established in the city in order to prevent any revolutionary actions. The years which followed were harsh for the residents of Tripoli and many of them reacted at the regime by joining the National Resistance. You can still see the monuments which are dedicated to the heroes of this period, one is at the square of Independence and the other one is behind the cemetery of Ai-Thanasi.

“Agios Vasileios square” is the central square of Tripoli. The metropolitan holy temple of Agios Vasileios is the most notable monument here. The temple was built in the location where a mosque used to be. Close to “Agios Vasileios square” you will find the War Museum of Tripoli. Here you can see priceless artifacts from the Greek War of Independence in 1821 and from the battles of 1940. Guns and swords which were used during the battles, documents, the death mask of Theodoros Kolokotronis and uniforms are some of the most important exhibits of the museum. You can’t miss the “Areos square” which is located at the place where the seraglio used to be. Here you will see the marble column which is dedicated to the heroes who played an important part during the liberation of Tripoli from the Ottomans in 1821. The historical building of the courthouse was founded in 1914 and was inaugurated in 1934. In this square you will also find the monument where the bones of Theodoros Kolokotronis are kept under the impressive statue of the brave general on his horse A beautiful neoclassical building, which was designed by the architect Ernst Ziller, houses the archaeological museum of Tripoli. Initially it was used as the hospital of the city and today you can admire numerous treasures – more than 7000 findings- from the Arcadian history. The “Petrinou square” has become the most vibrant place of the city due to the many cafes, bars and restaurants around this area. The “municipal theatre Malliaropouleio” is the most notable building here. The theater was founded in 1905 and was a donation of Ioannis Malliaropoulos, who was a doctor and art lover. The grove of Agios Georgios (St. George) is located about 1km away from the centre of the city. Don’t miss the opportunity to follow the paths and find the temple of Agios Georgios inside the grove. Here you will also find the theater which is used for theatrical and musical events during the summer period.

Cave of Kapsia Just 15km away from Tripoli there is one of the most beautiful caves of Greece. The cave of Kapsia reveals the geological events which took place even 3 million years ago! Fragments of bones, the traces of a major flood and the magnificent stalagmites and stalactites will enchant you during your visit. The villages of mountainous Arcadia Close to Tripoli you could visit beautiful picturesque villages, with houses made of stones, surrounded by the beautiful nature with the forests, the mountains, the gorges and the rivers. One of the most known is Dimitsana, a beautiful village with plenty choices for your accommodation, traditional restaurants and the amazing open air hydro movement museum. In the museum you have the opportunity to learn everything about the traditional small industries and how they operated by using the energy from the water. Close to Dimitsana, you could also visit some historical monasteries of Arcadia, the philosopher’s monastery or even try hiking at the gorge of Lousios River. Close to Dimitsana you could visit Stemnitsa, where you will find a Folklore museum of Arcadia. Around 56km away from Tripoli you could find Lagadia village which will impress its visitors with its amazing view and architecture. Vitina must be one of the most popular destinations of the traditional villages in Arcadia. People tend to visit this destination throughout the year where you will find traditional hotels and apartments as well as plenty of restaurants to enjoy the local cuisine. Last but not least, in Libovisi village you will find the house of the famous chieftain Theodoros Kolokotronis which today is a museum with exhibits from the battles of the Greeks against the Ottomans. Arcadia is also a perfect destination for religious travelling. Some of the most important monasteries here is the historical monastery of Epano Xrepas (10km), the beautiful monastery of Varson (11km), the byzantine temple of Tegea close to the archaeological site (7km), the monastery of Panagia Eleousa (33km), the monastery of Panagia Vlacherna (33km) and the historical monasteries of the Lousios gorge. You could also try visiting some of the most beautiful lakes around the area. The closest one is the Taka Lake, only 10km away from Tripoli. It is an important hydro biotope of Peloponnese where many species of migratory birds find shelter. The artificial lake of Ladona is located between the Arcadian mountains offering an amazing view to its visitors. The most famous one is however the Cave of the lakes which is an amazing location 60km away from Tripoli. The arcades, the stalactites and the lakes create a unique location which won’t disappoint the visitor.

The archaeological tour of Arcadia

Arcadia is a place with countless historical places and archaeological sites. So, it seems also impossible to visit Tripoli and don’t grab the opportunity to visit some nearby villages and create your own archaeological tour of Arcadia. About 7km away from Tripoli there is Palantio village. In the nearby hill of the village there are the remains of Ancient Palantio. The ancient city became a metropolis of the Roman Empire and had many privileges and freedom during that time. According to myths, Evandros along with many people from Arcadia started from this city and travelled towards Italy where they established their settlement on a hill which was named Palantio (later Palatino). The archaeological site of Tegea is only 10km away from Tripoli near the village Alea. The excavations have revealed parts of the ancient theater, the Agora, an Early Christian Basilica and parts of a byzantine settlement. The archaeological research has revealed also two thrones from the official seats of the theater which you can see today in the archaeological museum of Tegea. In Tegea, there is also one of the most important temples of the ancient world, the temple of Alea Athina. In the position where a Mycenaean sanctuary used to be, the ancient temple was built in 4th BC and was embellished with the great statues of Athina, Asclepius and other deities and heroes. Mantineia is a town only 14km away from Tripoli and is one of the most ancient cities of Arcadia. We have read references of this ancient city in the Homeric poems, where Homer describes the city as a loveable one. The most important monument here is the ancient theater which was constructed initially in 370BC and was embellished by the Romans later. In the archaeological site of Mantineia you could also visit the Agora, the temples of Hera and Zeus and the imposing “Vouleftirio”. Close to Mantineia there are the remains of the sanctuary of Poseidon, who was one of the most worshiped gods in Ancient Arcadia. About 15km away from Tripoli you will find the settlement of Nestani and the remains of the ancient city. The ancient acropolis thrived during the 5th - 3rd century BC. Close to this area you will find a monastery which is dedicated to the Mother of our Lord called “Παναγιά της Γοργοεπηκόου». The archaeological site of Orchomenos is about 30km away from Tripoli. Homer mentioned this ancient city in his poems and the researchers have confirmed the human existence in this area already since the prehistoric times. Today you can still see the remains of this glorious ancient city as well as the theater which was build during the Hellenistic period.

Skiing Tripoli is the third highest city of Greece with altitude 660 meters. Just 27km away you will find the ski centre of Mainalos. The center is equipped with 5 ski slopes and is ideal for all the family. You will find a chalet as well as places to rent ski equipment and ski lessons. If you are in mood to travel a bit further you could try and visit the ski centre of Chelmos in Kalavrita which is located 85km away from Tripoli. It is larger than the ski centre of Mainalos and offers plenty of snow activities for its visitors. Biking Don’t miss the opportunity to bike through the villages near Tripoli and discover some archaeological treasures as well. Ancient Tegea and Ancient Mantineia are some nice options here for the beginners while for the most experienced ones there are numerous challenging routes around Peloponnese. Rafting is definitely a must here! The rafting route starts from the beautiful Lousios River, continues to Alfios River and ends up to the beautiful bridge “Koukos”. Hiking - the gorge of Lousios River is a wonderful opportunity for hiking. Besides the nature you will hike across some important historical monuments, like the oldest byzantine monastery of Philosofou (9th AD), which was the “secret school” of the Greeks during the Ottoman occupancy. You will also come across the new monastery of Philosofou and the monastery of Timios Prodromos, which is literally built inside a cliff and offers its visitors a breathtaking view of the gorge. 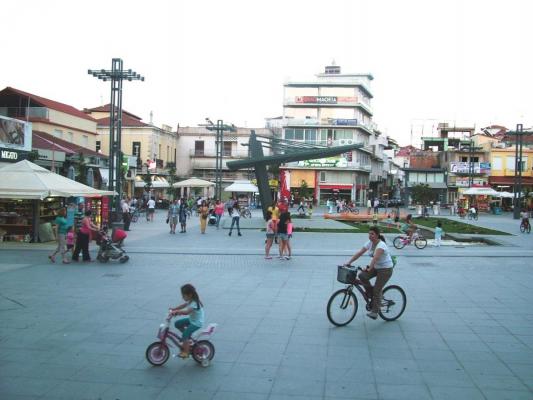 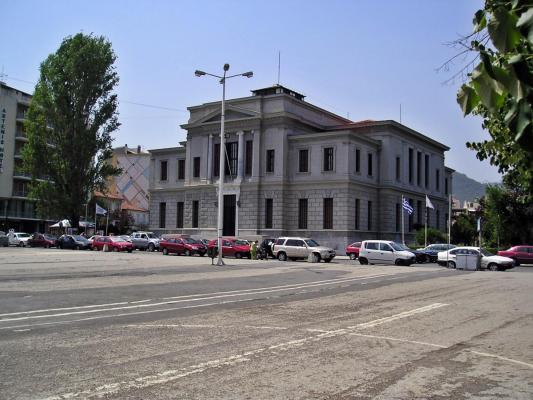 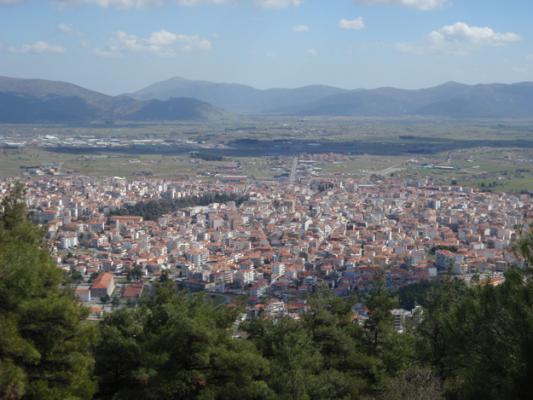 Make sure to visit this area with one of our holiday packages:
Seaside & Archeological Biking Tour
Peloponnese Multi Activity Holidays
Hotels you can stay:
Palatino Rooms & Apartments
Activities you can perform:
Biking
Hiking
Rafting
Tweet