Kyllini is situated at the northwest of Peloponnese. Kyllini, in geographical terms, includes the wider districts of Kyllini, Kastro, Kato Panagia, Neochori, Loutra Kyllini, Golden Beach (Chryssi Akti) etc. For the locals though, the word Kyllini is used for the limited area of the harbor.
Kyllini is a popular destination for many travelers due to the long sandy coastline of the area, the thermal springs Loutra Killinis and the famous archaeological sites of the area like the Chlemoutsi Castle and the Ancient Olympia. In the area you will find a lot of hotels, apartments, campsites, restaurants, fish taverns, shops and a lot of activities.

Kyllini was inhabited already since the Paleolithic period. The first written reference of the area is found in the Homeric poems. According to Pausanias, Arcadians settled in the area Kyllini which was the harbor of the Ancient Elias. In the area of Killini there were sanctuaries dedicated to Asclepius, Aphrodite and Hermes who was the protector of the ancient city.
In 1204 the Francs and specifically the prince William of Villehardouin rebuilt the ancient harbor and founded the new city which was called Glarentza during this period. Glarentza (also known as Clarentia or Clarence) is situated at the west of the modern settlement of Killini. It was build in order to be the harbor for the ships of the princedom of Achaia and became one of the most important harbors and economic centers in the Mediterranean Sea. During the medieval period Killini was also known for the exportations of the local products, like olive oil, wine, raisins and cotton. The settlement Glarentza had a hospital to take care of the sailors and a mint which manufactured the coins of the town’s currency until 1353. The city used as currency “denier tournois”.
The settlement of Glarentza was close to the Castle of Chlemoutsi (also known as Chateau Clermont) which also was built by the Franks. The Castle of Chlemoutsi was the residence of the prince as well the main fortress of the area.
The decline of Glarentza started in the beginning of the 15th century. The decadence of the princedom left the city of Glarentza unprotected. In 1407 Glarentza was plundered and occupied by the army of Leonardo II Tocco. In 1414 the city was returned to the prince Kentiriona Zacharia only for a few years until it was occupied by Oliverio Franco in 1417-1418. In 1421-1422 the city was sold to Karolos Tocco who was the count of Cephalonia and despot of Epirus. In 1427 the city was besieged by John VIII Palaiologos and in 1428 the harbor was given as dowry to the last Byzantine emperor Konstantinos Palaiologos by Tocco. In 1430 Glarentza was occupied by Catalans who sold it back to Konstantinos Palaiologos. After these invasions, in 1432 Konstantinos Palaiologos destroyed the harbor in order to get rid of the pirates. The sultan of the Ottoman Empire Murad II plundered the wider area of Glarentza in 1446 and the area was handed to the Ottomans a few years later.
The area remained as a small settlement which was mostly populated initially with people from Eptanisa (a complex of islands in the Ionian Sea) and later with immigrants from Mikra Asia.
Travelers who visited the city during the 19th century described the abandoned city of Glarentza with the remains. Even the remains of the old city were demolished by the German army during the World War II.

Chlemoutsi Castle
The most important monument here is of course the imposing Chlemoutsi Castle. It is located near Kastro village about 6km away from the modern town of Killini.
The castle was founded in 1220-1223 by Gottfried I. von Villehardouin and was the most important fortress of the princedom of Achaia. The castle was initially named Clermont which later became Chlemoutsi by the Greeks.
The castle was built in a strategic position from where the castle could view the plains of Illia and the Ionian Sea. The castle protected Glarentza, which was the capital of Andravida and the important harbor of the area. After the death of William of Villehardouin there were conflicts about the succession and the princedom was gradually declined.
The castle became the apple of discord among the nobility. It was occupied by the Catalans until the Francs reoccupied the castle. The castle stayed under the Frankish domination until the beginning of the 15th century when Karolos Tocco, the governor of Cephalonia and Despot of Epirus, took control of the castle. In 1427 the castle was given as dowry to Konstantinos Palaiologos and became the administrative and military centre of the area. In 1460 the Turks occupied the castle until 1687 when they were defeated by the Venetians. The Venetian occupancy lasted until 1715 when the Turks reoccupied the castle. The castle gradually lost his importance and in 1701 Grimani proposed the demolition the castle. However the castle stayed in the hands of the Ottoman Empire until the Greek War of Independence in 1821. A large part of the castle was destroyed in 1826 by Ibrahim which indicates that the castle was used during the Greek War of Independence. Today the castle is restored and houses a museum with important exhibits.
The monastery of Vlacherna is located about 2,5km southeast of Killini. The construction of this monastery seems to date back in the end of the 12th century during the Byzantine Period and was completed by the Franks. It is a byzantine nunnery surrounded by trees. It is a three aisled basilica with inner and outer narthex, a vestibule and the nave. Inside the monastery the visitor will see the wall paintings and the beautiful image of Panagia Vlacherna (Virgin Mary). Inside the monastery there are the remains of saints and a library with historical documents. The monastery hosts a beautiful feast every 8th of September.
Loutra Killinis are the famous thermal baths, about 12km away from Killini. There is a hydrotherapy center in the area where you can enjoy balneotherapy, mud therapy etc. The water is known to have healing powers against skin diseases, asthma and arthritis. The baths were already known since the antiquity and you can still see the remains of the Roman Baths.
The islet Kafkalida can be visited by a boat from the harbor of Killini. It is only a few minutes away from Killini and here you could visit Roman tombs and the remains of a chapel which dates back in the Early Christian Period. The lighthouse on the islet Kafkalida was constructed in 1906 and has a height of 15 meters.
Ancient Elis (Ancient Ilida) is the important ancient city which hosted the Olympic Games during the antiquity. Today you can visit the archaeological site and the nearby archaeological museum which exhibits statues, pottery and other findings which date back from the Early Helladic Period until the Roman Period. Quite close to Ancient Elis there is Kentro village. Near this village you could visit the artificial lake with the marvelous dam of Pineios. Pineios dam is one of the largest in Europe with 50 meters height and 2.175 meters length. The construction of the dam was completed in 1968.
Ancient Olympia is an experience of a lifetime! It is the place where the ancient Olympic Games took place. You could visit the stadium and the facilities where the ancient athletes trained. Here you will also see the remains of the temples dedicated to Zeus and Hera. The archaeological museum near the area astonishes the visitor with the priceless findings, like the famous statue of Hermes of Praxiteles.

You could enjoy a variety of water sports in the beaches of Killini, like windsurfing, sailing etc.
The coastline of Kyllini is ideal for walking. The duration of your route can be adjusted by your mood and physical condition. You could also walk from the harbor of Killini until the rock of Kefalopetra. This route lasts about 45 minutes.
You could also try rod or underwater fishing in the areas Fournia, Kefalopetra, Kafkalida and Analipsi.

The beautiful island of Zakinthos can be visited by boat from the port of Killini. The transfer by boat lasts 1 hour and 15 minutes. Here you could visit the historical church Agios Dionisios or walk around the town. You could also arrange an island tour by boat in order to discover all the amazing hidden beaches of the island, the caves and of course the most famous of all, the beach with the shipwreck (Shipwreck beach). Don’t forget to taste the famous nougat “mantolato”, the local candy. Except Zakinthos the harbor of Killini is connected with another two beautiful islands of Eptanisa, Ithaki and Cephalonia.
South of Killini you could visit popular summer destinations like Arkoudi and Kourouta. 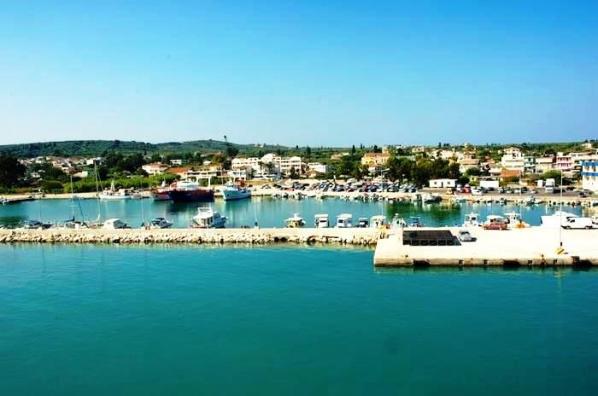